34 years ago I had to make a very hard decision. I was married and, within a month, pregnant. My husband was an alcoholic. I knew that raising my son either in that chaos or by myself with no skills and poverty being a sure thing were not options for what dreams I had for my son. So, even though married, I gave my son up to a family who I knew would raise him to be a man and that, if we were really lucky, that they and he would have a good time doing it.

He was born the day after the Winter Solstice and he’s always been a rising golden son to me. Even though I never saw him again after his third day of life. I grieved the loss as though it were permanent. I am also adopted (part of why I felt it was a good decision, my adopted parents were and are fabulous) and so I expected that was that. I thought of him all the time. I cried. My grief subsided over the years because I eventually stuffed my feelings as deep as I could so I could move on with my life but I still thought of him often and still have my regrets.

Last May 2015, I got a message in LinkedIn from a stranger. The only reason my LinkedIn account was turned on was because I was laid off from my job and looking for work. His photo was tiny and the letter respectful and it contained his birth date. I looked at that photo so hard my eyes couldn’t focus but I could have sworn this boy looked just like me, twins even. Further photos bore this out, we were twins until puberty hit. I clearly see how that lay off turned into my own personal miracle. My baby boy was a grown man and he wanted to meet me, know me, be my son. And I’m Mom.

I still get extremely emotional over this for so many reasons that are just too personal to state here but one of them is gratitude.

We’ve spent some lovely times together since then (we met 2 weeks later) but they live in another city and we don’t see as much of each other as I would like but we do try to make the times we get together memorable. We’ll meet next at Norwescon.

It’s astonishing how much we have in common and none of them have anything to do with how we were raised. We both hate peas, like to design houses (his are modern, mine are cob/round), and we love watching back to the earth how to videos on YouTube, which we did on my big screen last Christmas. And we yakked through them all, discussing what the guy was doing and basically completely geeking out. It was AWESOME. We’re both in the IT work world. Who knew that kind of stuff was GENETIC?

For his birthday I wanted to give him something very special. The photo above is of my son and his wife and their son (yes! I’m Grandma too!! and I adore his wife, we are all just so well suited to each other, how can you not love a woman who goes around in public with a dinosaur bike helmet???) walking down a crowded street. Aside from the cars and signs and buildings I felt this photo to be so poignant. I brought it up on my laptop, placed a plain sheet of paper over it and traced the three of them.  Did you know you can use your monitor like a giant light box?

After we had eaten dinner, I told him there was a present on the wall that you see when you walk into my home and to go find it. And I heard him gasp. Best response ever. I love him so. I wanted him to feel loved every time he sees it.

What follows are a few photos as I moved through the process from photo to pencil design to transfer to wood burning and coloring. Please enjoy! 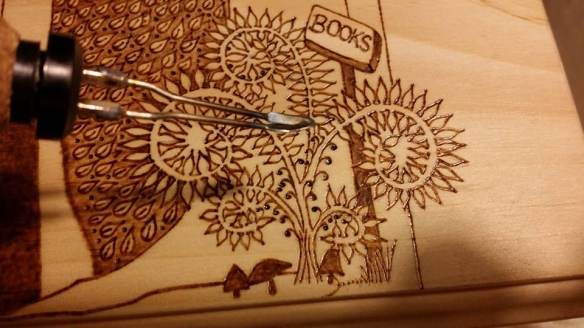 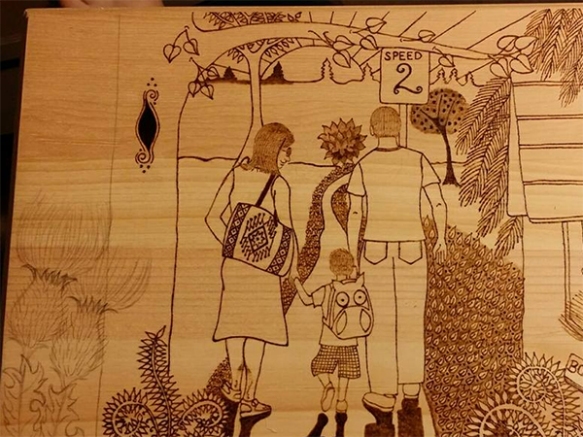 P.S.  I’m the birch tree in the close distance and that is a sun RISE. 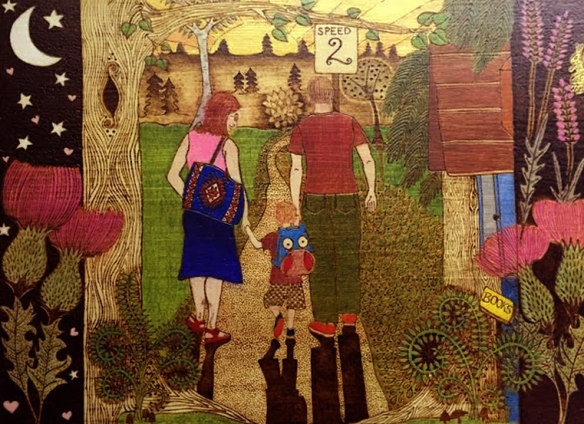 3 thoughts on “Lost and Found”